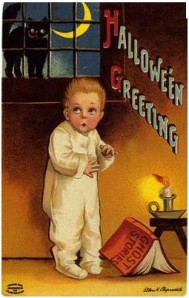 By the Victorian era, the ancient rituals of All Hallows’ Eve had evolved into a holiday celebrated by children and adults alike.

A special exhibit at Acorn Hall will explain popular games played at Victorian Halloween parties. It will also highlight the 19th-century Spiritualist movement.

Spiritualism asserted that spirits of the dead can and do communicate with the living. Spiritualism developed and reached its peak between the 1840s and the 1920s. It was most enthusiastically embraced and led by women, putting it at odds with established religions.

The exhibit, which will run from October 1 to November 4, is included in the price of a tour of Acorn Hall.

Acorn Hall, the headquarters of the Morris County Historical Society, is an 1853 house remodeled into the Italianate Villa style in 1860. It is open to the public on Mondays and Thursdays from 11 a.m. to 4 p.m. and on Sundays from 1 p.m. to 4 p.m. Tours of the house and exhibits are $6 for adults, $5 for seniors, and $3 for students. Children under twelve are free. For directions or additional information call 973-267-3465 or seewww.acornhall.org.