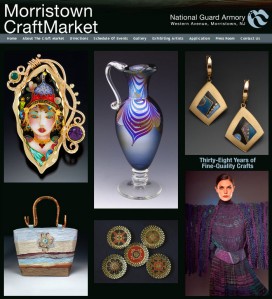 In a Special Citation for 2011, the Arts Council of the Morris Area recognized the Morristown CraftMarket as a “nationally acclaimed fine art and craft show” and as “a major cultural and charitable event, attracting thousands of visitors each year in addition to gifted artists from over 25 states throughout the country.”

Showcased in the Morristown CraftMarket are extraordinary, one-of-a-kind and limited edition fine arts and crafts in all contemporary media.

160 top American artists from throughout the nation will display and sell their original and magnificent creations in jewelry, leather, ceramics, metal, glass, wood, wearable fiber and more – all made in the United States.

“If you enjoy having lovely arts and crafts around you that you know are of exceptional quality, made in this country and will last, this is the show for you,” said Geoffrey Price, Volunteer Show Director.

“The artists compete in a rigorous, nationwide selection process and the panel of judges, who are peer artists, choose the best in each fine arts and crafts category,” said Price.

The Morristown CraftMarket is sponsored and run by the not-for-profit Kiwanis Club of Randolph Township, NJ. All proceeds from the show benefit local charities.

“The Morristown CraftMarket is one of only a handful of fine art and craft shows of its size and quality in the country run to benefit charities in the community,” said Price.

Also included in admission to the show will be a Fall Plant Sale featuring elegant and unusual plants from expert horticulturist Ken Selody of rare-plant nursery Atlock Farm in Somerset, NJ.

Selody will bring his one-of-a-kind living sculptures, including precisely trimmed topiaries, along with cacti and other succulents, tropicals, perennials and more.

“For several years Ken Selody appeared as a guest on Martha Stewart’s TV show, and also was a contributing editor to her magazine,” said Price. “He’s also been a frequent presenter at the Philadelphia Flower Show.”

Big Brothers Big Sisters will be collecting gently used clothing throughout the show. Receipts will be issued for donations of clothing accepted at the collection truck located near the parking lot, which are tax-deductible to the extent allowed by law.

Tickets to the Morristown CraftMarket are $10 at the door. A weekend pass may be purchased for $12. Children under 12 with an adult are free. A coupon for $2 off the admission price is available online at www.morristowncraftmarket.org.

There is plenty of free parking.