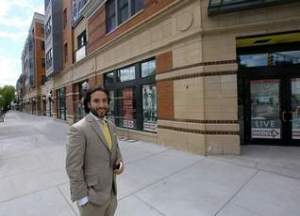 A company that owns seven restaurants in three counties has reached a lease agreement to open a Roots SteakHouse and a second, more casual restaurant on the street-level of the new ”Shops On The Green” at the former Epstein’s site.

Harvest Restaurants, the entity that operates restaurants in Morris, Union and Somerset counties, has negotiated a deal to lease about 11,000-square-feet for the opening of both a stylish, mahogany and leather-adorned steakhouse and a smaller eatery with ”a casual, urban feel,” said Grant Halliday, director of operations for Harvest.

Several million dollars worth of construction work is expected to start at the end of June or early July on the side-by-side eateries and openings are anticipated around November, Halliday said. No name has been chosen for the casual restaurant; both it and Roots will have liquor licenses.
Related

”These are two great locations for us,” Halliday said, noting that a main location draw is the two, seven-story luxury condominium and apartment structures on the property, situated across from The Green on Park Place and Market Street.

The restaurants will be at street level, where retail establishments serve as the foundation of the housing structures.

Levine confirmed that the lease deal with Harvest Restaurants has gone through and said that negotiations with an assortment of retailers are under way for available space at the site.

Levine said he and his partners want the restaurants and retail to be attractive to owners and tenants of the condos, penthouses and luxury rental apartments, as well as to the entire community.

”It’s very exciting. I think the two restaurants very much go with the caliber and quality of the buildings,” Levine said. ”It’s very important we try to service the tenants and the community.”

Thanks to the Daily Record for this article.